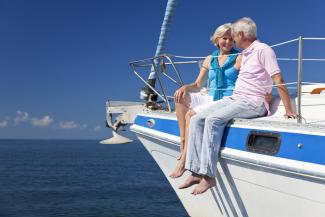 Planning for retirement requires you to make assumptions about your life and the world around you. Your path to retirement is a personal one with twists and turns that are unique to you and your circumstances. No other transition in life (off to college, first job, get married, start a family) is as welcome and feared as your retirement. Does it really have to be that way?  Keep in mind that to maintain your current lifestyle in retirement does not require you to replace your entire paycheck and the money you live on will not all come from your savings.  In a previous article I suggested that the 4% rule was a good starting point or guide for planning your early retirement account withdrawals. Here is how the rule works. In the first year of retirement you withdraw 4% of your savings. In the second and each subsequent year you withdraw the previous year amount adjusted for inflation. The amount withdrawn, plus any other income sources like a pension or social security, becomes the amount to be spent in a calendar year.  The flaw with this rule is that it assumes real (inflation adjusted) retirement spending is constant throughout one’s retirement years when, in fact, there is significant credible research that suggests that retiree spending is dynamic, unique to each individual and that it actually decreases over the course of your retirement.  (Please note that declining real spending does not mean declining spending.) The suggestion that retirees must plan for constant inflation-adjusted spending may overestimate the retirement savings many households will need for a happy and successful retirement. Some of the more popular dynamic spending models suggest real retirement spending declines in a range from 1% per year to 15% every 5 years.  In his 2013 study, entitled “Estimating the True Cost of Retirement”, David Blanchett of Morningstar finds “that in reality, real retiree spending decreases slowly in the early years, more rapidly in the middle years, and then less slowly in the final years.”

When you consider Mr. Blanchett’s theory, it seems intuitive to base retiree spending more on forecasted lifestyle changes rather than a hard, mathematical formula.  His theory divides our retirement years into distinct stages: Active (ages 65-75), Moderate (ages 75-85) and Slowing (ages 85 and up).  In the Active stage retirees see annual real spending declines of 1% as they enjoy a full range of leisure activities, like travel, sports/hobbies, dining out and entertainment. In the Moderate stage, retirees see annual real spending declines of 2% as their expenditures settle into a more stable and predictable pattern. In this transitional stage retirees become less active and reduce (often times voluntarily) discretionary expenditures. In the Slowing stage retirees see annual real spending declines again of 1% as discretionary spending decreases significantly, which decrease is greater than the increased spending seen in categories like health care and housing. While there is some debate on when exactly a retiree moves from one stage to the next, there is little disagreement on the outsized impact that abrupt health events can have on spending in the Slowing stage. The Blanchett theory (commonly summarized as 1%/2%/1%) allows for a safe withdrawal rate of 4.83%, higher than the more popular 4% rule. His study of actual retiree spending patterns, supported by research on dynamic retirement distribution strategies and spending policies, suggests that retirees may now need less retirement savings (or could retire earlier) while still enjoying sustainable retirement lifestyles with higher incomes.