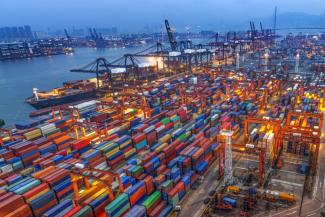 Changes from our October 2018 Market Watch are noted in italic.

We will continue to target an average fixed income portfolio duration of 5.97 years (or less), the current effective duration of the Barclays US Aggregate Bond Index.

Data – During Q4, the equity markets both here and abroad disappointed as investors retreated from most asset classes due to worries over US monetary policy, an inverted yield curve, never ending BREXIT negotiations and the back-and-forth trade conflict between the US and China.  For 2018, we saw the following benchmark returns:  US Large Cap – DJIA (-5.63%) and S&P 500 (-6.23%), US Small Cap - Russell 2000 (-12.24%) and International - ACWX (-15.99%). In contrast to the equity markets, economic data during Q4 was generally good. Expectations for corporate earnings growth remain solid. GDP, the broadest measure of economic output, for Q3 showed an annualized growth rate of +3.5%, which followed quicker growth in Q2 (+4.2%).   Volatility (as measured by VIX) spiked several times throughout the quarter finishing 2018 at 25.42, above the long run average of 20.0. The Conference Board in reporting the November LEI (Leading Economic Index) said that “despite the volatility in stock prices, the strengths among the leading indicators have been widespread. Solid GDP growth at about 2.8% should continue in early 2019, but the LEI suggests the economy is likely to moderate further in the second half of 2019.” During the quarter, the yield on the benchmark 10-year US Treasury declined from 3.06% to 2.69% and the yield curve partially inverted in December as the interest rate on five-year Treasury bonds fell below the rate on three-year bonds.   Monthly job growth averaged 239,000 in October, November and December as the national unemployment rate remained a low 3.9%. New weekly unemployment claims remained low, averaging 217,000 in Q4, compared to 211,916 in Q3. Consumer confidence, as measured by the Conference Board, reached a 2018 high in October before falling in both November and December.  The November Manufacturing Outlook survey (Philadelphia Fed) reported that “broad indicators were positive, but the movements were mixed this month. The general activity and shipments indicators fell from their readings last month, while the indicators for new orders and employment increased.”  Inflation, as measured by the change in the Consumer Price Index, came in at 2.2% in November and remained above the Fed target of 2%.  Retail sales rose a strong 5.1% during the critical holiday shopping period. Lower single-family housing starts, falling new home sales, declining building permits, rising mortgage rates and fading homebuilder sentiment all continue to impact the housing sector.

Outlook – There are several potentially disruptive forces which may continue to subject financial markets to sharp volatility swings in the coming year. Accordingly, our key investment themes for 2019 will be US monetary policy and how several geopolitical events could impact not only global economic growth but equity market performance. At its December 18/19 meeting, the Federal Open Market Committee (FOMC) raised its benchmark interest rate by 0.25% to a range between 2.25% and 2.50%.  The hike, which was expected, was the fourth hike in 2018 and the ninth increase since the bank cut its rate to nearly zero during the 2008 financial crisis. The Fed remains on track to continue with further gradual interest rate hikes, as appropriate, projecting two hikes in 2019 (down from the three hikes previously forecast). GDP growth expectations were lowered for 2019 from 2.5% to 2.3% and the forecast for 2019 unemployment remained unchanged at 3.5%. In his statement Fed Chairman Powell offered this assessment of current and future economic conditions “We have seen developments that may signal some softening, relative to what we were expecting a few months ago,” he said, pointing to “the slowing global economy and increased market volatility that is less supportive of growth. In our view, these developments have not fundamentally altered the outlook.” He added that “their assessment of risks to the economic outlook are roughly balanced and that the Fed will maintain an emphasis on a data dependent path as we head into 2019.”  Our read on the December FOMC meeting is that a more dovish statement concerning the path of future rate hikes may have been warranted. On January 5th Fed Chairman Powell did just that when he said this, “With the muted inflation readings that we’ve seen coming in, we will be patient as we watch to see how the economy evolves and are ready to change course significantly, if necessary.”

The most impactful geopolitical event will continue to be the ongoing trade conflict between the US and China, a conflict which we think may be resolved during 2019. The recent willingness of China to accommodate the US in some areas, such as tariff cuts, safeguards for intellectual property, and increased purchases of US goods is a good start. The big question now is whether the Trump administration will view these accommodations as enough to get the US to the table and attempt to fashion a broad trade deal. There are significant economic benefits to be gained by both sides and a successful deal would be welcomed by the financial markets.  BREXIT is in a precarious state as a recent deal negotiated between Britain and the European Union appears to have little chance of being approved in Parliament. While many of the technical terms can and will be agreed to, we think there remain enough key issues to hamper the UK-EU relationship for years to come. BREXIT without a finalized withdrawal agreement (a disorderly exit) is a worst-case scenario that will increase market volatility as we approach the deadline of March 29th.