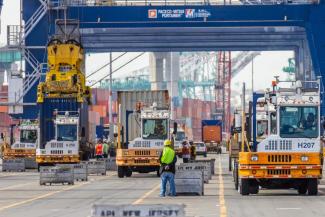 Changes from our July 2019 Market Watch are noted in italic.

We will maintain an average bond portfolio duration of approximately 5.49 years, the current effective duration of the Barclays US Aggregate Bond Index.

Data – For 2019, we see the following  equity benchmark returns:  US Large Cap – DJIA (+15.38%) and S&P 500 (+18.74%), US Small Cap - Russell 2000 (+13.04%) and International - ACWX (+9.74%). Economic data during Q3 was generally good, though expectations for US corporate earnings growth for have softened. As we move into Q3 earnings season there are concerns in the market about the combined impact of a stronger US dollar, slower global economic growth and ongoing trade tensions on companies in the S&P 500 with higher international revenue exposure. GDP, the broadest measure of economic output, for Q2 showed an annualized growth rate of +2.0%, which followed stronger growth in Q1 (+3.1%).  Volatility (as measured by VIX) was moderate throughout the quarter, peaking at 24.59 on August 5th, and finished at 16.5, below the long run average of 20.0. The Conference Board in reporting the August LEI (Leading Economic Index) said that “the Index remained unchanged and that the recent trends are consistent with a slow but still expanding economy, which has been primarily driven by strong consumer spending and robust job growth.”  During the quarter, the yield on the benchmark 10-year US Treasury dropped from 2.00% to 1.67%, hitting a low mark of 1.42% on September 3rd.  Thus far in 2019, the Barclays US Aggregate Bond Index has returned +6.29. Monthly job growth in 2019 has averaged 159,875 (compared to 208,750 in 2018) and in August the national unemployment rate remained a low 3.7%.  Consumer confidence, as measured and reported by the Conference Board, showed declines in both August and September as “consumers were less positive in their assessment of current conditions and their expectations regarding the short-term outlook also weakened.  The escalation in trade and tariff tensions in late August appears to have rattled consumers. While confidence could continue to hover around current levels for months to come, at some point this continued uncertainty will begin to diminish consumers’ confidence in the expansion.”  The September Manufacturing Outlook survey (Philadelphia Fed) suggested “continued expansion in manufacturing activity this month even though current activity and new orders indexes fell slightly in August.”  Inflation, as measured by the change in the Consumer Price Index, came in at 1.7% in September and remained below the Fed target of 2%.  Things may be improving in the struggling housing sector as some of the lowest mortgage rates (30-year rates have fallen to 3.73% from 5% in 2019) of the past 50 years may be luring buyers back into the market.

Outlook – Over the course of the summer the markets responded to each bit of news (good or bad) of the ongoing trade conflict between the US and China.  By the end of the quarter tensions had lessened somewhat in advance of renewed face-to-face negotiations now tentatively scheduled for early in October, which high-level meetings will include Chinese Vice Premier Liu He, US Trade Representative Robert Lighthizer and Treasury Secretary Steven Mnuchin.  Uncertainty about trade policy has discouraged business investment and resulted in a pullback in US manufacturing activity that is likely to continue in the absence of successful negotiations.  The noted weakness in the manufacturing sector is in contrast to a healthier US consumer side where household spending has been rising at a steady pace. While a breakthrough is not expected, some progress could be made on core issues for both sides. For the US, a commitment by China to structural changes in its economy, protection of intellectual property, currency manipulation and the increased purchase of US agricultural goods. For Beijing, a removal of US tariffs and the recent punitive treatment of telecommunications giant Huawei Technologies.

At its September 17/18 meeting, the Federal Open Market Committee (FOMC) cut the fed funds rate by 25 basis points to a target range of 1.75% to 2.00%. This rate reduction, which was expected, was the second rate cut in 2019.  The Fed decision was not a unanimous one with three dissents, two votes to keep rates unchanged and one vote for a larger 50 basis point cut. In addition to the reduction in the fed funds rate, the interest rate the Fed pays on excess reserves (IOER) was cut by 30 basis points a move taken to address liquidity problems in the overnight repurchase lending market. The lack of a commitment by the Fed for further easing was viewed as a bit more hawkish than what most investors had expected. In fact, the message conveyed by the FOMC was mixed at best even with the pledge “to act as appropriate to sustain the current economic expansion.” In his opening statement, Fed Chair Jerome Powell emphasized “that while the economy continues to perform well and that the baseline outlook looks favorable, the increased uncertainty due to the trade war, weak global growth and still-low inflation suggested the desire to take out some insurance.” He continued by saying that “there will come a time, I suspect, when we think we’ve done enough. But there may also come a time when the economy worsens and we would then have to cut more aggressively. We don’t know.”  Allianz economist Mohamed El-Erian perhaps said it better when he offered this commentary.  “The Fed doesn’t think it can stand still because of the potential disruption to markets that could feed back into the economy, but it can’t go forward because there is no economic justification for more aggressive rate cuts.”