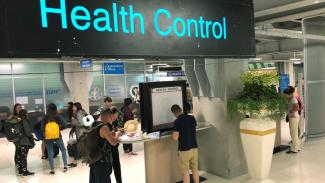 Markets – January was a relatively calm month for investors until fears of an outbreak of the coronavirus captivated us. Volatility rose as the number of cases increased daily leading to the month end declaration by the World Health Organization of a public health emergency of international concern. Investors also worried anew about the return of a partial yield curve inversion as we saw the yield on a 3-month T-Bill (1.57%) exceed the yield on a 2-year Note (1.37%). In a second consecutive unanimous vote the FOMC, at its January 28/29 meeting, left the federal funds rate unchanged in a target range of 1.5% to 1.75%. In its statement, the FOMC “indicated that the labor market remains strong and that economic activity has been rising at a moderate rate. Although household spending has been rising, business fixed investment and exports remain weak.”  In January, we saw losses across most equity asset classes including: US Large Caps (S&P 500 was -0.16% and DJIA was -0.98%), US Small Caps (Russell 2000 was -3.23%) and International (ACWX was -3.42%). Volatility (as measured by VIX) finished the month at 19.01 (with a high mark of 19.99 on 1/31), below the long run average of 20. The Barclays US Aggregate Bond Index rose +2.02% as the yield on the benchmark 10-year US Treasury bond fell from 1.91% to 1.52% during the month.

GDP - The Advance Estimate of Q4 GDP growth released by the Bureau of Economic Analysis (www.bea.gov) showed that the US economy grew at an annual rate of 2.1% in the fourth quarter of 2019, above consensus forecasts which ranged from 1.6% to 2.0%. The better than expected data was the result of continued consumer spending as well as government expenditures. Personal consumption expenditures (PCE), a gauge of spending by American households, rose 1.8%, well below the 3.2% pace in Q3. For the full year, the US economy grew 2.3%, below the 2.9% increase from 2018 and the 2.4% gain in 2017, the first full year of the Trump presidency. As reported, “the increase in Q4 GDP reflected positive contributions from PCE, federal government spending, residential fixed investment and exports that were partly offset by negative contributions from nonresidential fixed investment and private inventory investment.” Business sentiment, particularly in the manufacturing sector (about 11% of domestic economic activity) remains weak.

Earnings - The Q4 earnings season is well underway with 45% of the companies in the S&P 500 having reported their quarterly earnings.  As reported by FactSet thus far “the results are better than expected with reported earnings that are 4.1% above estimates with 69% reporting (EPS) above estimates and 65% reporting sales above estimates. Blended earnings (actual plus estimated) are expected to decline -0.3%, which is smaller than the decline of -1.8% of last week. Positive surprises reported by companies in the Technology and Consumer Discretionary sectors were partially offset by negative surprises coming from the Industrials sector. On a sector basis, we see earnings growth in seven sectors: Communication Services, Consumer Staples, Financials, Health Care, Real Estate, Technology and Utilities. Four sectors are forecast to report earnings declines: Energy (-42.5%), Industrials (-10.6%), Materials (-10.2%) and Consumer Discretionary (-9.2%). From a valuation perspective, the forward 12-month P/E ratio is now 18.4 which is above both the 5-year (16.7) and 10-year (14.9) averages and the highest level since May of 2002.”