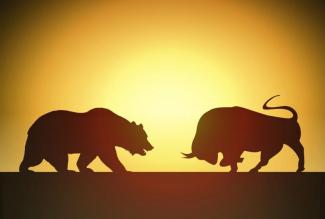 cor-rec’tion   n. a change or adjustment that makes something right, true or accurate

As defined, a correction sounds like it might be a good thing. If so, why do so many investors cringe when they hear this word? As soon as their portfolio starts to look good, they fear the next correction must be just around the corner. Of course, sometimes that intuition proves correct, other times not so. Long term investors know that corrections are just part of the ebb and flow of the financial markets. In considering what a correction is we should also define what bull and bear markets are. Then we should discuss, from a historical perspective, how often they occur and whether they can be accurately predicted.

First, let’s look at the difference between a stock market correction and a bear market. A market correction is a period of selling or temporary stock price declines. A correction is often referred to as a broad market decline of at least 10%. (Smaller declines, say of about 5%, are often referred to as dips.) Since 1945, there have been 30 corrections, which as a group, saw declines averaging 13% and lasted on average about 70 days.  During this period, a correction occurred about once every 2.4 years. The longest streaks of no market corrections are 7 years (1990 to 1997) and 4.6 years (2002-2007). A bear market is a longer term period of market declines which typically starts when a correction exceeds 20%. On average, bear markets last about 14 months (measured peak-to-trough), result in a cumulative price decline of about 25% and occur about once every 7 years. The longest time between bear markets was from 1987 to the dot-com crash in 2000, a period of almost 13 years.  The dot-com bear market inflicted deep losses (-49.1%) and lasted over 2.5 years. The 2008 financial crisis was even worse with outsized market losses (-56.8%) and lasted over 1.5 years. By comparison, the Covid bear market of 2020 brought above average losses of -33.9%, but lasted only 33 days (just 24 trading days) – the fact that the pandemic rages on today only makes it seem much longer. Recovery in share prices has been swift as shown in the doubling (+100% gain) in the S&P 500 since the market low on March 23, 2020.

When we look back in history, we see that corrections take place within bull markets, which are defined as long-term periods in which investor sentiment is positive and stock price levels are generally climbing. The length of bull markets has varied with time, from as short as 2 years to as long as 9 years, with an average of about 4.7 years.  Bull markets that bounce back the fastest (like the swift recovery from the 2020 downturn) often become some of our best and longest lasting bulls. The duration and returns of bull markets are best viewed in light of interest rate and GDP growth conditions and the magnitude of the downturn prior to the start of the bull market, rather than merely the length of the run.

Unfortunately, having a better understanding of stock market corrections does not allow investors to gain any real advantage in predicting the next one.  In 2021, we have seen several rolling corrections that have upended parts of the market, one asset class or sector at a time – technology and growth stocks were hit first, then the energy sector and then small caps, the latter which have struggled throughout the year.  As investors, it is important to develop a psychological detachment that is present during both bull and bear markets. If you are like me, you probably enjoy checking your stocks during good times and avoid the business section of the newspaper during bad ones. That is ok, but, remember that good investing opportunities often present themselves in the meanest of bear markets.