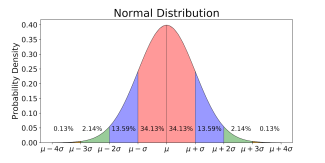 What is Standard Deviation?

As defined, standard deviation “provides a statistical measure of historical investment return volatility and sets forth a distribution of the ranges of probable outcomes. In investing, measuring the standard deviation of returns shows the extent to which returns (daily, monthly, or annual) are distributed around the average return, estimating a range of probable outcomes, and establishing a likely framework of risk and return trade-offs.”  Ok, that all sounds good, but what does it mean to me as an investor?

To put these concepts to work, let’s consider the past five-year investment returns of the stock of Company ABC (10%, 8%, 9%, 11% and 12%) and the stock of Company XYZ (20%, 0%, -10%, 10% and 30%), both of which are US large cap companies operating in the same industry sector.   The average return (or mean) of 10% is the same for both ABC and XYZ for the five-year period. The standard deviation, however, is quite different. For ABC the standard deviation is 1.4% and for XYZ it is 14.1%. Our interpretation of the bell curve then tells us that for ABC, in 68.26% of the time its investment returns will be within one standard deviation of the mean or will fall between +8.6% and +11.4%.  In contrast, with XYZ expected returns within one standard deviation of the mean will present a much larger range falling between -4.1% and +24.1%.  So, in the context of this example, if an expected return of 10% meets my investing criteria, then ABC is the less risky and better choice than XYZ.  Which stock would you select?  Company A with its more predictable expected return or Company XYZ which will get you to the same place, but adds some excitement along the way?